Argentinian-born Alfredo Häberli is a 55-year-old, Swiss contemporary industrial designer. Häberli manages to unite tradition and innovation in his design, much of which is influenced by his early childhood in Argentina as well as his curiosity about everyday life. We meet with Alfredo to discuss his ongoing collaboration with Iittala.

Today, he is based on the ‘Swiss Gold Coast,’ working in an open space that overlooks Lake Zürich. The office serves simultaneously as studio, workshop and cabinet of curiosity. Here, large-scale panels hang on the walls. Each panel is covered with a colour-coded arrangement of found objects, materials, and other individual, pinned elements. There are wooden propellers and shoe lasts, tractor seats and fish grill wires, a 1965 Iso Grifo matchbox car sits alongside a collapsible drinking goblet, there are toothbrushes and ice hockey helmet parts. The studio’s shelves are filled with little knickknacks, rare glass collectibles, material tests and prototypes—all carefully placed in a grid. Within this living archive we meet with Alfredo to speak about his early work with Iittala, and the ongoing collaboration to which it led; about glass innovations, floating wine glasses and wine glasses that don’t break; as well as the most successful projects to have come out of the last 20 years in that he and Iittala have been working together. 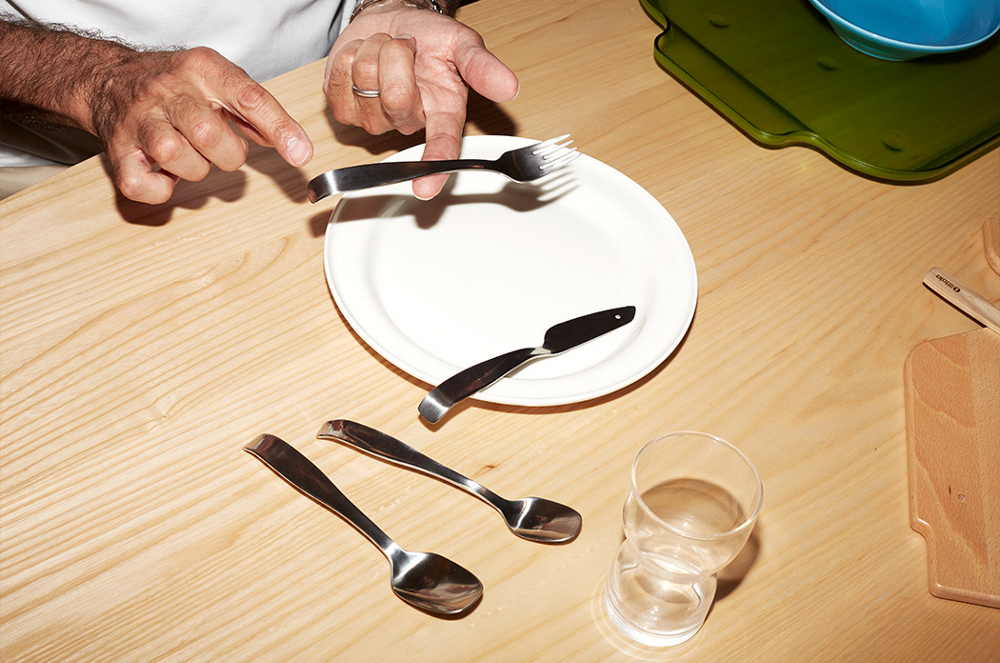 ANNIINA KOIVU  Alfredo, let’s talk about your long history with Iittala. Many of your projects have already become design classics; take ‘Essence’ (2001), ‘Kids’ Stuff’ (2003) or your first joint project ‘Origo’ (1999).
ALFREDO HÄBERLI  I was introduced to Iittala by a good friend—Stefan Ytterborn, of the Stockholm-based agency Ytterborn & Fuentes. He was setting up the international ‘Relations’ collaborations between Iittala and designers like Konstantin Grcic, Björn Dahlström, Marc Newson, Antonio Citterio and so forth. I hoped to become part of the series, but instead Stefan said there was another job for me—a far more challenging one. He wanted me to produce a new ceramic series for Rörstrand.
AK  Sweden’s traditional porcelain producer, Rörstrand had only just become part of the Iittala (and now Fiskars) Group. You come from a family whose traditions lie in gastronomy—your parents ran a successful restaurant during your childhood years in Argentina.
AH  That’s true, I am sure my background helped. With Origo, we decided to take a straightforward, analytical approach and asked: how many items does a person really need at home? What’s the alternative to a large service made up of specific, rarely used items like a sauce boat, fish platter, tureen etc.? So, we found the starting point of ‘in-between objects’ and brought the group down to seven items.
AK  So in the final iteration there are three different-sized plates and three vessels from cups to bowls. Working on both eating and serving ware, you created more universal items, which could be used for a variety of purposes.
AH  Yes. Take the small cup for example: it can be an egg cup but also be used for digestives, or even a vessel for your pills. The medium-sized cup can be for coffee, but it could also be a bowl to hold olives or other snacks. It has a handle, but the handle is short and flat—an abstraction that allows the cup to be seen as something more than just a coffee cup.

See all Alfredo Häberli pieces
AK  The other invention can be found on the underside of each item, where there is a ring and a little button in the centre.
AH Normally, a plate has a central dent to secure your cup. We did the opposite and added a bump.
AK  Tapio Wirkkala used this kind of dent in his ‘Captain’ series, which was specially designed for use on a boat.
AH  Yes. Whatever you stack—another plate, cup or bowl—can be fixed on top of this little extrusion. AK Origo was revolutionary from the start, receiving prizes and entering design museum collections. But tell me, what about the coloured stripes? AH Everyone likes a bit of colour on their table. To get around flowers, which I am not so good with, I thought that a rainbow might add the ultimate decorative flair to the white series. Initially, we only coloured the egg cup. It went viral, and the entire first production run sold out in a few weeks. Finally, we coloured all the items and Origo became part of the Iittala collection.
AK  Then came Essence two years later, the family of drinking glasses. Essence arrived at an important moment in Finnish food culture. Dining habits had started changing: outdoor dining became more elegant, the first Finnish restaurants were receiving stars, and people became wine lovers.
AH  Iittala was catching up with this shift.
AK  Until then, most of the wine glasses in the catalogue had all had sturdy stems. Take Wirkkala’s ‘Tavastia’ or ‘Tapio’ series, or ‘Kekkerit’ and ‘Jurmo’ by Timo Sarpaneva.
AH  Yes, before those—we are talking about 20 years ago—Finns tended to use beer glasses or water tumblers for wine drinking, if they drank wine at all. With this background in mind, we again asked the question: what is the minimum number of items needed on a modern dinner table? The answer was seven, plus a carafe. 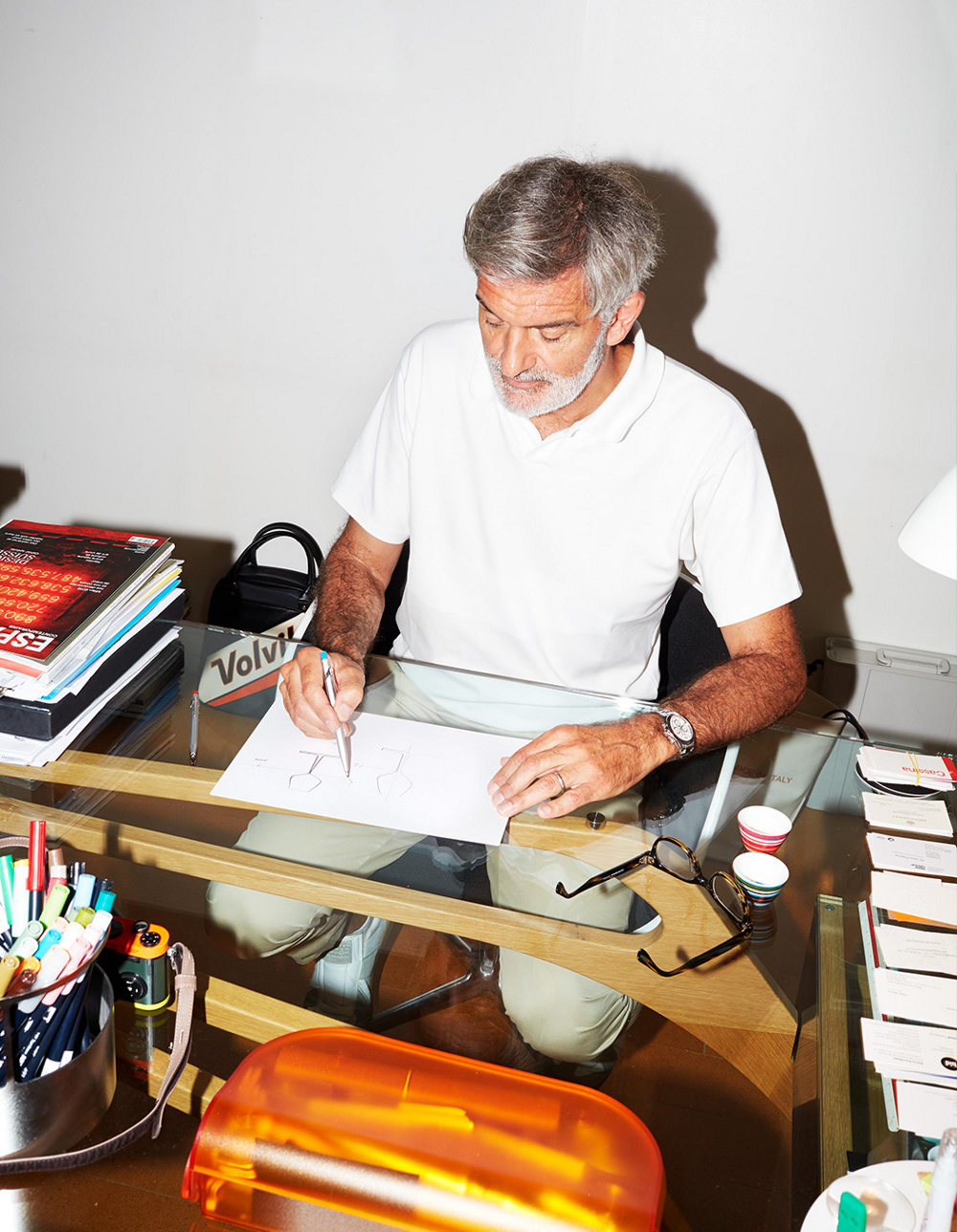 AK  Essence is a very elegant collection of rather large, slightly masculine glasses created from a new and surprisingly durable glass material recipe.
AH  Formally, I wanted a more masculine shape, so that Essence could differentiate itself from the wine glass’ traditional female form. The connection between the goblet and the particularly long stem had to be very delicate, and I wanted a completely flat plate.
AK  What was the engineer’s first reaction?
AH  They saw me as fairly young and naive. They asked me, “Alfredo, is this the first time you’ve designed in glass? We can see...” but they took on the challenge. The only solution was to work with pressed glass and develop a new material, one that’d be particularly hard and durable…
AK  ...or even unbreakable, as Swiss artist Roman Signer demonstrated in one of his experiments.
AH  (laughs) Yes. We produced 20 moulds that allowed for an elevated production of up to 25,000 pieces a day. All were composed of a pressed glass stem that could be attached to a different-sized goblet. Finally, everything came together. 20 years later, Essence is still part of many dinner tables, both in restaurants and in people’s homes.
De-Signer Roman Signer for Alfredo Häberli

In 2006 Alfredo Häberli was a guest of honour at the Kortrijk Biennale Interieur in Belgium, where he was invited to create a large personal exhibition. He decided to not only show his own work, but to showcase the long tradition of Swiss design, as well. Thus, he brought more than 380 exhibits from the design collection of the Museum für Gestaltung Zürich to Belgium for the exhibition. To commemorate the occasion, he also published the ‘Design Live’ book, which gave seven Swiss artists carte blanche to play with Alfredo’s design pieces. One of the artists was Roman Signer (1938), who is known for his witty sculptures and performative actions, which often include countdowns, explosions and objects flying through the air. For the artwork ‘De-Signer’, Signer took an Essence glass, filled it with red wine, and placed it on the ‘Move It’ (Thonet, 1996) table, with a tilting top. The table, in turn, was standing above an electrical ventilator, of the kind typically used in agriculture to blow dry air into the barn. A shot of air catapulted the tabletop up and the wineglass fell to the ground. Alfredo recalls receiving a phone call from Signer with a single message: “Alfredo, you are right, the glass did not break.” 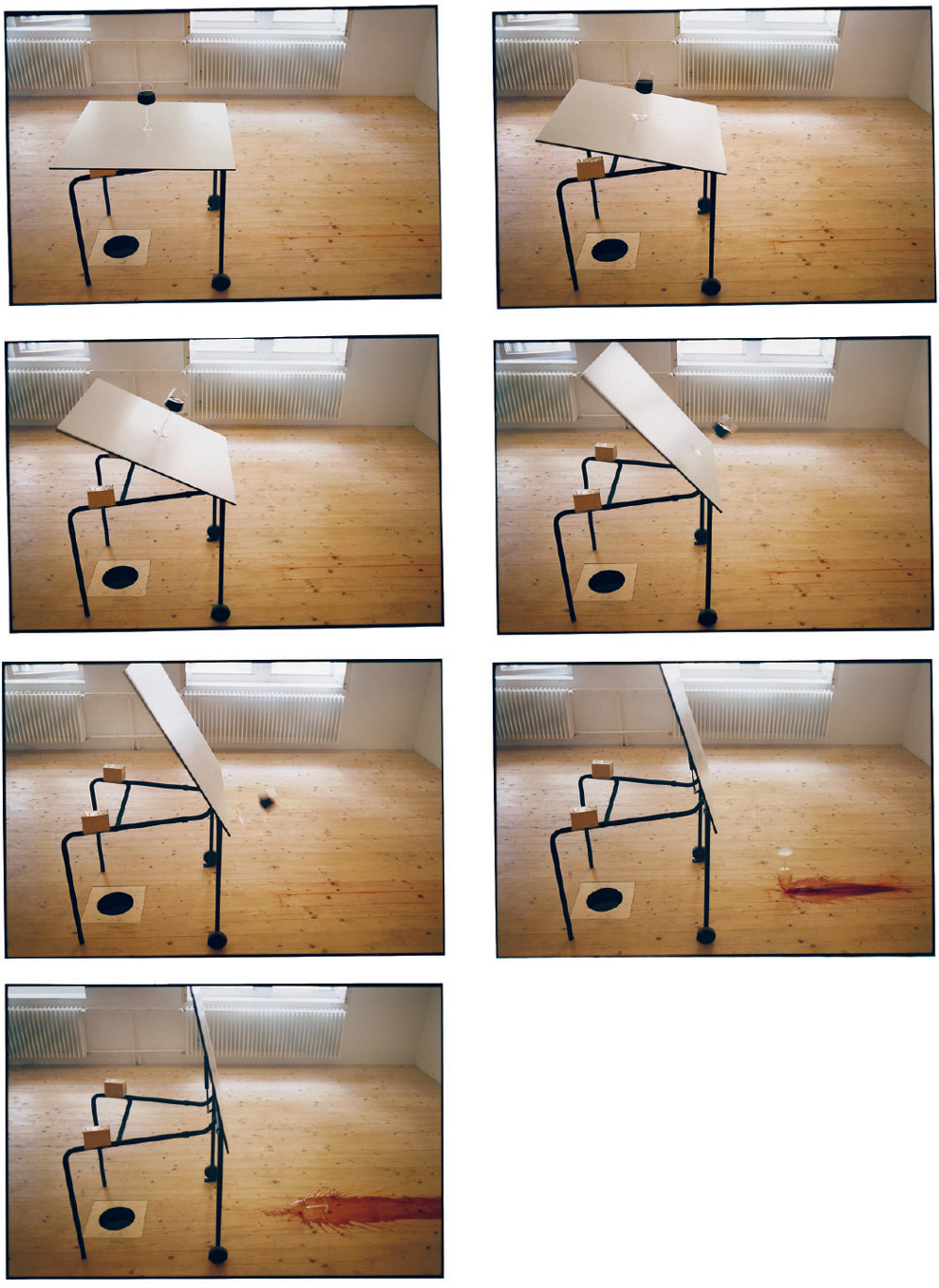 AK  Two years later came ‘Senta’ (2003), another glass collection. Designed for everyday use, Senta was not as tall as Essence, but more feminine, and featured a very nice facette detailing that makes the glass seem to hover over the table.

AH  At the time, we feared that Essence was too elegant. But by the time Essence and Senta were sitting next to each other on the shop shelves, people had already fallen for Essence. Let me also give away a little trick that, in my opinion, might contribute to Essence’s popularity, particularly—but not only—in places like Scandinavia. Because Essence is so big, a glass looks almost empty, but the amount of wine poured in the glass is actually a lot.

AK  You expanded the catalogue even further, mixing materials and bringing in a whole new clientele: children. Just a year later, in 2003, Kids’ Stuff was released.

AH  Around that time my son Luc was about two years old. The project came naturally. I understood many things, simply by observing him. For example, his hands were too small to hold a glass with one hand. But the solution was not to down-scale a regular glass by 20%. Rather, the problem was the vessel’s shape. So, I created a curvy silhouette. Similarly, the cutlery has an elevated bow, which allows for a child to easily grab a fork, knife or spoon and hold it securely. The tilted end keeps it secure on the edge of the plate and prevents it from sliding into the food.

AH  Just like you should talk with them normally, at eye level, I believe you should also give kids the possibility to handle things easily. They should not have to be frustrated by not being able to get any peas onto a spoon.
AK  That ’s not always an easy endeavour for adults either...
AH  True. But kids get a second chance, with my plates: if it doesn’t work at the first border, you get another go on the outer rim. Eating should not be difficult work, but enjoyable.
AK  In general, the problem with children’s dishware is that it is often poorly made, for fear that kids will outgrow the items or break them. Instead, Kids’ uses a variety of high-quality materials. In addition to ceramic, glass and metal you also used wood and plastic.
AH  The cutting board and butter spreader in juniper wood come from my own childhood. We used to have a morning and an afternoon break, when we ate bread and butter, with sugar on top. This ‘Znüni’ and ‘Zvieri’ (nine o’clock and four o’clock break) is still an everyday ritual in Swiss kindergartens. It was a way to bring my childhood and the Finnish tradition together. The idea behind the plastic tray was not a reference to fast food—goodness, no!—but was intended to make it easier for kids to take their dirty dishes to the kitchen. I know my son always ate fast and wanted to get back to playing—so the tray allowed him to lend a quick hand with clearing the table, then off he went. Unfortunately, the tray was expensive to produce and that seems to be one of the reasons why Kids’ Stuff eventually went out of production.
AK  Origo’s twenty-year anniversary is coming up this year and Essence’s follows in 2021. You, meanwhile, are working on a new collection.
AH  We are developing a new series in both ceramic and glass that will complement Essence. Next year, you’ll see what we have come up with this time. 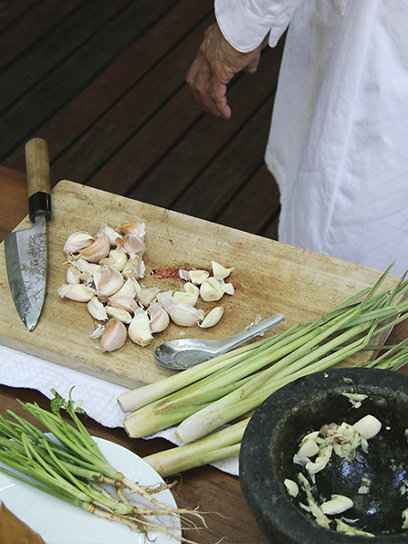 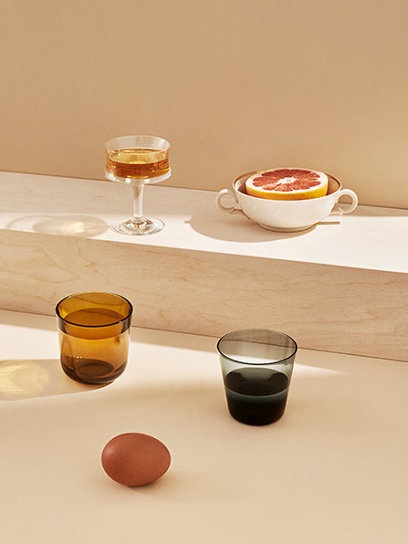 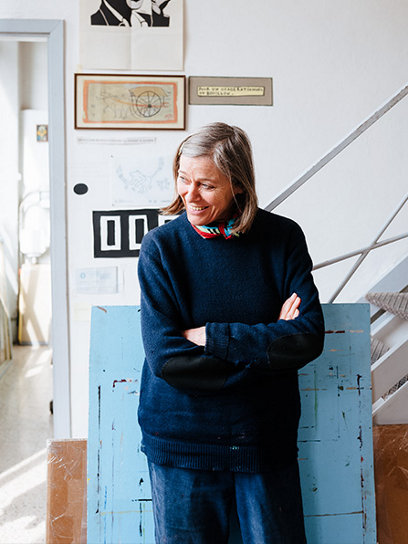 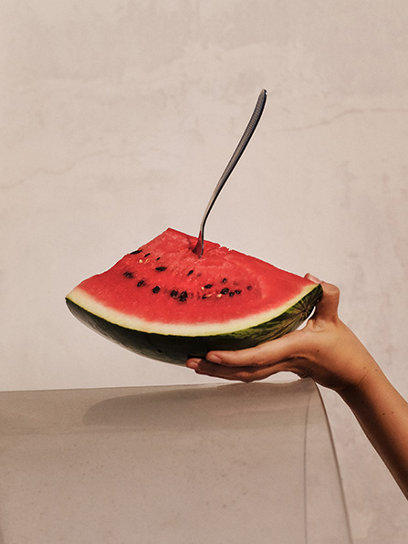 The Beauty of Impracticality

When did convenience come to mean twenty-four-seven culture, disposable objects and pre-sliced fruit? When did the quest for ease trump our craving for harmony? The freedom promised by convenience might lie somewhere else entirely.